Peter Paul Rubens and his paintings 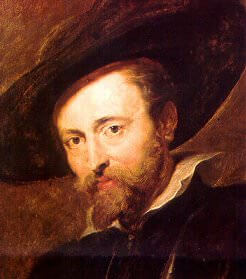 Peter Paul Rubens was a Flemish born artist, who made a name for himself not only in the art world, but also through this diplomatic reign. Much of his work focused on religious figures, as well as diplomatic figures of the time, and he was known for the Baroque style, and bold European style of painting, which most of his works took shape around. Although he lived a short life, he had amassed many achievements by the time of his death. In addition to being one of the most talented artists in Europe, whose work outsold other artists at the time, he was also knighted, was hired for various commissions for diplomatic figures as well as church pieces, and even after his death, his fame continued to grow in the art world. Rubens was also well known for the Baroque movement, which emphasized movement, bold color choices, and sensuality in the works.

Peter Paul Rubens was born on 28 June 1577, during The Golden Age of the Dutch Republic, roughly spanning the 17th century, which was a near-miraculous period in which the republic occupied a position of preeminence in commerce, finance, science, and art. After the united Seven Provinces secured independence from King Philip II of Spain following the Thirty Years War, the Dutch Republic became the most prosperous nation in Europe, a melting pot of innovation and influence. Three of the most revered painters in art's history emerged from this milieu: Rubens, Rembrandt, and Johannes Vermeer.

Peter Paul Rubens was fundamental to this golden age, transforming the look of the Counter-Reformation as well as the style of European painting on the whole. Rubens traveled widely, deftly blending the gravitas of Italian Renaissance work and the northern predilection for naturalism. From 1600 up to 1608, Rubens made Italy his home, where he was at the service of Duke of Mantua. While in Italy, he finished much of his works, and many of his studies. During his career, Rubens was influenced by the great works of Caravaggio, Titian as well as Leonardo da Vinci, Raphael, and Michelangelo. He returned to Antwerp in 1608, where he became the court painter, for Spanish governors of Flanders; subsequently, he also became the court painter to Charles I and Marie de Medici of France. Rubens was even knighted by Charles I, for his exceptional talent, and diplomatic awareness of the times.

During the next thirty years of his career, many well known pieces and influential pieces of the time, were delivered. Some of the most notable and most well known include: Raising of the Cross (1610) and The Rape of the Daughters of Leucippus(1617). In addition to his courtship for religious works, and altar pieces, Rubens was also highly in demand for his courtship work, and creations of some of the most well known diplomatic figures of the time. The reason for this was the allegorical connection, and the mythological ties he made, between these diplomatic figures, and gods and goddesses. This was done to juxtapose the lofty positions these leaders held, and their power over the countries which they ruled.

Some of Peter Paul Rubens' most well known pieces, were religious and hunting pieces, landscape pieces were also some of his most popular works. But, Rubens was also well known (possibly most well known) for the nude images he drew of women, and the voluptuous figures which he would depict in the images he created of these women. He loved portrayal of women, who had "meat on their bones, as well as middle aged women, who were a normal part of society at that time.

Due to the fact that he was so well known for his altar pieces, and diplomatic figures, Rubens had more requests to complete works, than he had the time to work with those who wanted to commission him for works he could create. Some of the additional important figures he created, which were commissioned art works include: The Hippopotamus and Crocodile Hunt in 1616, Peace and War in 1629, The Consequences of War in 1638, and The Judgement of Paris, in 1639. Each of these pieces drew on his love for Baroque style, and the European bold color palettes, which were seen throughout most of his career, and the pieces which he created during his extensive career.

Not only was Rubens one of the most famous and well known artists of his time, he was also well known for his accomplishments outside of the art work which he created during his career. Most notably, the fact that he created one of the most famous studios in Antwerp of the time; not only did this studio produce some of the finest art pieces during his lifetime, but he also introduced many new, and talented artists to the world, who worked for Rubens in his studio.

After being knighted by Charles I, Rubens was also a highly trusted adviser in Spain, the Netherlands, during a twelve year strife between the two countries. In fact, he was commissioned to negotiate in France and in England, on behalf of the Spanish Netherlands. He became extremely close with Isabella, and in 1624, he was granted a patent nobility, by Isabella's nephew, Phillip IV. His ability to connect with all sides, and discuss the current affairs, made him a trusted figure of the time, by diplomats, and by countries who were not able to resolve certain issues through their diplomatic leaders of the time.

In addition to being one of the most well known artists of his time, and producing work through most of Europe, he was also a well educated art collector, who enjoyed the works of other top artists of the time. Due to the fact that he had ties with so many political figures of the time, he had very little trouble in selling his art pieces; in fact, most of the works he sold, were highly priced for the time, which eventually led to his fortune and reputation as an artist of the time.

Peter Paul Rubens and Rembrandt van Rijn are two of the most revered artists of Northern Europe; each had enormous impact on the art of their own time and on the generations that followed. Rubens was a classically educated humanist and scholar. Rubens's style combined a knowledge of Renaissance art with lush brushwork and a lively realism. He produced some of the most well known pieces of his time, and was a proponent of the Baroque style, and he was well known as a trusted court painter, with ties to several diplomatic figures of the time. There is no artist of any era with a feel for the physicality and sensuality of paint, who hasn't been affected by Rubens in one way or another. Eugene Delacroix, Edouard Manet, Vincent van Gogh, Paul Cezanne and Edgar Degas, to name but a few, were all powerfully influenced by Peter Paul Rubens. Although much of his success came after his death, Rubens was a well known artist of his time. And, although he is most well known for his religious figures and court painting work, he also had many other accomplishments, outside of the art world. From his talent at negotiations with different rulers and diplomats of the time, to his ties with the nobility and most elite people of the time, Rubens is one of the most well known, and highly influential artists, in Flemish history.

Raising of the Cross

The Battle of Anghiari

Massacre of the Innocents

The Fall of Phaeton

The Judgement of Paris

Descent from the Cross